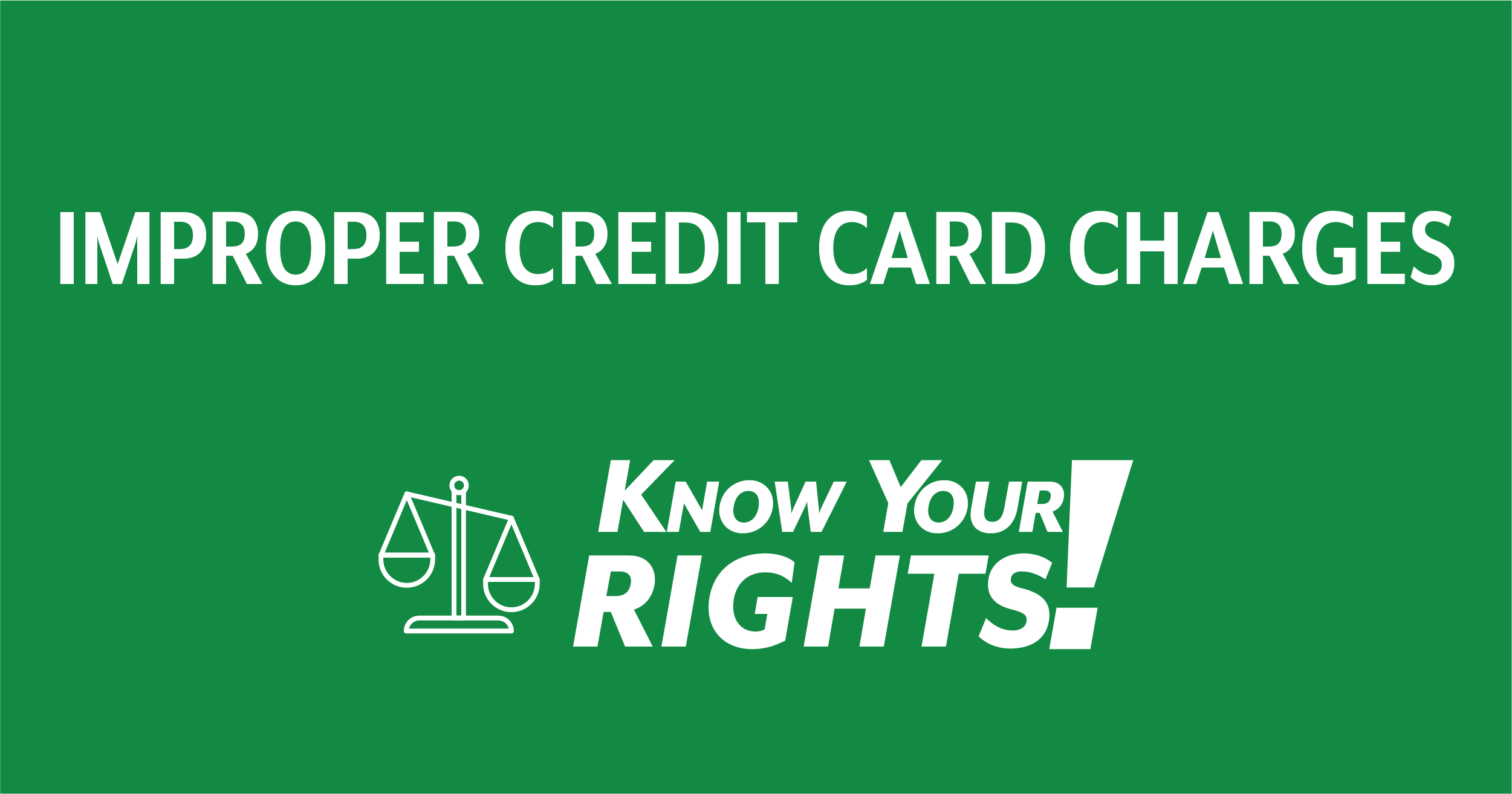 The information provided on this post does not, and is not intended to, represent legal advice. All information available on this site is for general informational purposes only. If you need legal help, you should contact a lawyer. You may be eligible for our free legal services and can apply by calling our Covid Legal Hotline at 1-844-244-7871 or applying online here.

What credit card charges can I dispute?

If any of the things below happened to you, a Federal law called the Fair Credit Billing Act (FCBA) may be able to help.

What charges are covered by the Fair Billing Credit Act?

The Fair Billing Credit Act (FCBA) applies to credit cards and accounts with no set schedule to  pay off the whole amount you owe.

An “installment loan” has a specific a payment schedule, usually paying the same amount each month.

These scheduled payments are usually used for things like cars, homes, furniture, major appliances, and “promissory notes” (like bank loans).

What does the law do?

The FCBA covers disputes over some  "billing errors":

How do I use the law?

They do not have to say they got the complaint if the problem is fixed within the 30 days.

The credit card company has  two billing cycles (but not more than 90 days) after getting your letter to work out your dispute.

What happens after the letter goes out

After you write to dispute charges the FCBA lets you do some things.

You may withhold payment on the disputed amount (and charges on that amount) during the investigation.

You must pay any part of the bill not in question, including all other finance charges, on the amounts you are not disputing.

The creditor may not take any legal or other action to collect the disputed amount and related charges (including finance charges) during the investigation.

The creditor may not threaten your credit rating, report you as delinquent, accelerate your debt, or restrict or close your account because your bill is in dispute or you have used your FCBA rights.

It against federal law for creditors to discriminate against credit applicants who exercise their rights in good faith under the FCBA.

For example, a creditor can’t deny you credit just because you've disputed a bill.

The disputed amount can count against your credit limit.

The creditor may report that you are challenging your bill.

If it turns out that your bill has a mistake, the creditor must explain to you — in writing — the corrections that will be made to your account.

In addition to crediting your account, the creditor must remove all finance charges, late fees, or other charges related to the error.

If the creditor determines that you owe a portion of the disputed amount, it must give you a written explanation. You may request copies of documents proving you owe the money.

If the creditor's investigation finds the bill is correct, you must be told promptly and in writing how much you owe and why. You may ask for copies of relevant documents.

At this point, you'll owe the disputed amount, plus any finance charges from when the amount was in dispute.

You also may have to pay the minimum amount you missed paying because of the dispute.

What happens if I disagree after the creditor investigates my claims?

If you disagree with the results of the investigation, you may write to the creditor.

You must do that within 10 days after receiving the explanation.

You may say that you refuse to pay the disputed amount. But the creditor may now begin collection procedures.

If the creditor reports you to a credit reporting company as delinquent, the report also must say that you don't think you owe the money.

The creditor must tell you who gets these credit reports. The creditor also must promptly report any subsequent end of the reported delinquency to everyone who got a report.

creditor who fails to follow the settlement procedure should deduct $50 from your bill (or the amounts at issue and finance charges on them if they are less than $50).

This $50 rule applies even if the bill turns out to be correct.

For example, if a creditor acknowledges your complaint is too late — or takes too long to resolve a dispute, the penalty applies.

The penalty also applies if a creditor threatens to report — or improperly reports — your failure to pay during the dispute period.

What can I do if I think there has been a violation of the FCBA?

The Federal Trade Commission enforces the FCBA for most creditors except banks.

If you think a creditor has violated the FCBA, file a complaint with the Federal Trade Commission.

You also can sue a creditor who violates the FCBA.

If you win in court, you may be awarded damages, plus twice the amount of any finance charge — as long as it's between $500 and $5,000, or higher amounts if a pattern or practice of violations is established.

The court also may order the creditor to pay your attorney's fees and costs.

If possible, hire a lawyer who is willing to accept the awarded to you by the court as the entire fee for representing you.

Some lawyers may not take your case unless you agree to pay their fee — win or lose — or make you add to the court-awarded amount if they think it's too low.

What if the complaint is about the quality of the goods or services purchased?

Disputes about the quality of goods and services are not "billing errors."

The dispute procedure above doesn’t apply to complaints about the quality of goods or services.

If you have a problem with goods or services you paid for with a credit or charge card, you can take the same legal actions against the card issuer as you can take under state law against the seller.

You can only use this protection, if you must have made the purchase in your home state or within 100 miles of your current billing address and the amount charged was more than $50.

You must make a good faith effort to resolve the dispute with the seller first.

Because of this right to sue, the card issuer may be willing to remove a charge that you challenge. But the FCBA procedures above will not apply.

What about other billing rights that I may have?

Businesses that offer "open end" credit, like credit cards, also must do these things:

What if I instead call the credit card company to dispute the charge?

Credit card statements have a number to call about problems with the bill.

Many people call the number when they see a mistake. This may solve most problems.

Schedule a reminder to make sure the problem is fixed within 45 days of the bill that had the problem.

If it is not fixed, send the letter described above so that the letter will get to the credit card company within 60 days of the bill with the problem.