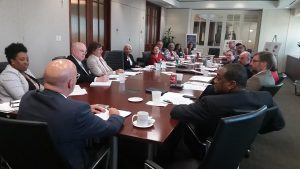 New Orleans, Louisiana – Southeast Louisiana Legal Services (SLLS) announced today that it is has established a 50th Anniversary Advisory Committee to assist its Board in commemorating this milestone in its history. This fall, “Justice is Golden” as the agency turns 50.  “SLLS is honored to join forces with so many other community leaders with a demonstrated commitment to equal justice to amplify our impact and help drive future innovation and partnership in the interest of justice”said SLLS Board President Vivian Guillory.

Remarking on the importance of SLLS, Honorary Chair Chief Justice Bernette Johnson said, “The help legal aid programs provide keeps faith with one of America’s core values – equal access to justice–and changes the lives of low-income people every day.” Pat Vance, Co-Chair of the 50th Anniversary Advisory Committee noted “For decades, SLLS has been at the forefront of increasing access to justice for vulnerable Louisiana citizens. I am thrilled to help lead this Committee as it lays a strong foundation to fight for fairness for the next fifty years.”

The committee will plan a year of activities, beginning with a Kick-Off event on November 8, 2017 at the Louisiana Supreme Court featuring a panel discussion on the “Future of Civil Legal Aid” from 4-5:30 p.m. followed by a reception. During the 50th Anniversary year from Nov. 2017 to Oct. 2018, an event will be held at each of Louisiana’s four law schools. The Committee will also work to increase awareness of the importance of civil legal aid to improving lives and in strengthening communities. A recent Economic Impact Study released by the Louisiana Bar Foundation found that for every $1 invested in civil legal aid, there is $8.73 of social return on investment through immediate and long-term benefits and taxpayer savings.

Co-Chair Darrel Papillion stressed SLLS’ critical role in our justice system, “If all Americans do not have reliable access to our courts to resolve disputes and redress wrongs, the promises of our founding fathers are rendered meaningless, and we fail to live up to our national promise of equal justice under law.”